Almost 25 years after it first premiered in London, Glengarry Glen Ross is back with its first major revival in over a decade and with an accomplished production team behind the scenes and an all-star cast at the helm: what could possibly go wrong?

David Mamet’s Pulitzer Prize-winning play acts as a harrowing observation of the cut-throat world of American Real Estate. Chasing the “good leads” and, more importantly, closing the sale is the be-all and end-all for the pack of slippery salesmen who make up the mainstay of the seven-strong cast that finds itself in the midst of an unsolved crime.

To say that Director Sam Yates’s already infamous production has had a turbulent start would be an understatement.  However, in true West End fashion, the show must go on and Glengarry Glen Ross will shortly be entering the second quarter of its limited 14 week season. But rest assured, with plenty of drama taking place off stage, the action on stage still packs a punch. The laughs come thick and fast at times throughout this perfectly-pitched production, but so too do the moments of shock and awe, with one expletive in particular from hard-nosed Ricky Roma (Christian Slater) causing a keen theatre-goer in the fifth row to gasp with unparalleled astonishment and obvious surprise.

Slater excels as the classic anti-hero, a bullish salesman with an ego the size of the Empire State Building and a sales patter smooth enough to convince even the most resistant of investors to part with their hard-earned cash. Opposite Ricky Roma sits Stanley Townsend (Shelly Levene). In stark contrast to Roma, who is enjoying the form of his life, Townsend spends every waking moment in pursuit of that all-important signature on the bottom of the cheque with an insatiable hunger to get his name back on the top of the board, much to the displeasure of Kris Marshall’s wily, by-the-book Williamson who toes the party line, “marshalling” the sales leads, keeping his hot-headed team in check.

On the opposite end of the scale, Don Warrington’s take on the nervy and anxious George Aaronow is heart-warming, his pursuit of personal gain taking a very different path than that of his egocentric counterparts. Strong support also comes in the form of Oliver Ryan’s gritty cop, Baylen, and Daniel Ryan’s gut-wrenching portrayal of James Lingk, an all-American everyman plunged into a world of lies and deceit that may just cost him his marriage. But a special mention must go to Mark Carlisle who has stepped up to the plate at the eleventh hour in the absence of Robert Glenister and commands the stage as the fiery Dave Moss.

With recent events in the media causing a stir and a shift in the public’s perception of fame and power, Glengarry Glen Ross could not have landed at a more appropriate time. 25 years after Mamet put pen to paper and produced this timeless classic, it feels as pertinent as ever and will only serve to strike a chord amongst London’s theatregoers.

Forget ‘Death of a Salesman’: these salesmen are very much alive and are guaranteed to give you a great night out at the theatre in exchange for your hard-earned cash.

Christian Slater stars in David Mamet’s acclaimed masterpiece, Glengarry Glen Ross, returning to London’s West End this Autumn for its first major revival in over a decade. This ground-breaking modern classic has won every major dramatic award on Broadway and in the West End, including the 1983 Olivier Award for Best Play and the 1984 Pulitzer Prize for Drama, and was later adapted by Mamet for the 1992 film starring Jack Lemmon and Al Pacino.

Lies. Greed. Corruption. It’s business as usual.
David Mamet’s modern classic Glengarry Glen Ross is set in an office of cut-throat Chicago salesmen. Pitched in a high-stakes competition against each other, they will do anything, legal or otherwise, to sell the most real estate. As time and luck start to run out, the mantra is simple: close the deal and you’ve won a Cadillac; blow the lead and you’re f***d. 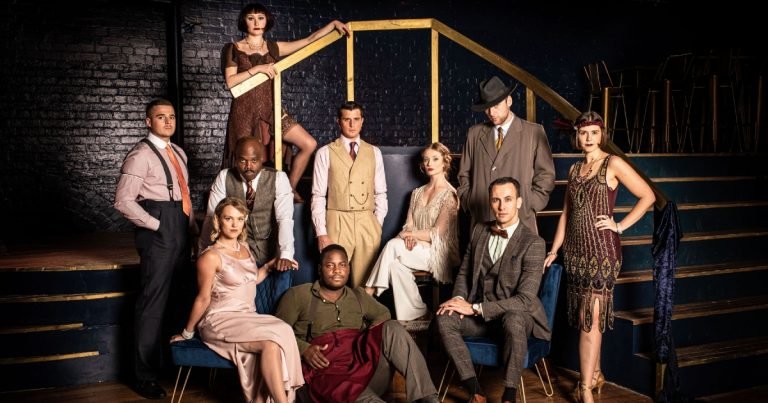