In an unadorned room of the Camden People’s Theatre, Emma Packer’s CTRL+ALT+DELETE achieves so much more than the sum of its parts. A room, a woman and a chair – this is minimalist theatre at its best. We meet Amy (performed by Packer), politically-aware and with a sense of the wider injustices of the world around her, as she dissects her own youth and torment, the violence suffered at home at the hand of her mother. It’s no mean feat to compel an audience with so little to look at, but nothing else is needed in the light of Packer’s writing and performance. She moves seamlessly from mother to daughter, a solo act to be reckoned with.

At first, the pace feels a little frantic as we move from theme to theme in quick succession, but the play quickly settles right into the violence at its heart – that between an abusive, unsympathetic mother and her daughter, who is just trying to make sense of her treatment.

Blurring the personal with the philosophical, the political and activist undertones are cleanly and concisely woven into the whole, as the viciousness in the home bleeds out into the wider London scene Amy inhabits.

Packer delivers solidly and smoothly moments of both pure charm and deep darkness; she morphs seamlessly between characters, capturing them each instantly and with a wholeness of an actress well beyond her years. Politics, love, loss, violence, war – all are examined with grace and honesty. I could not help but find Amy endearing; a testament to the force of Packer’s performance. I only wish that her mother might have been given room to divulge a little more complexity – she remains, from start to finish, nothing but pure monster. Her reasons, her thought processes – these are not revealed with the intricacy reserved for Amy. Despite this, Packer’s strength in each role cannot be understated.

It’s a tough, dark subject matter, and though there are moments when this is hammered home almost too forcefully, it is all set against such a recognisable, relatable present; this is writing which does not shy from the big issues. There are moments where the didactic tone could be tempered, where the jarring juxtaposition between a personal, intimate story and the wider injustices of the world could be softened. But ultimately, the plea for individual responsibility and reflection is honorable, and nothing detracts from Packer as a presence on stage. I look forward to more from this extremely talented young woman, who has achieved a great deal and delivered something with so much heart and courage in CTRL+ALT+DELETE.

Ctrl+Alt+Delete by Emma Packer is a tale of resilience in the face of adversity.
Amy Jones from Brixton, is an emotionally charged girl with a strong political heart. Amy challenges the injustices of the world; where war rips communities apart, equality isn’t universal and your biggest enemies are sometimes the very ones who brought you into the world. 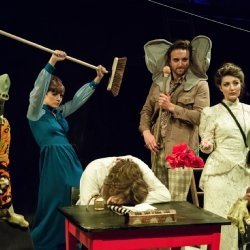