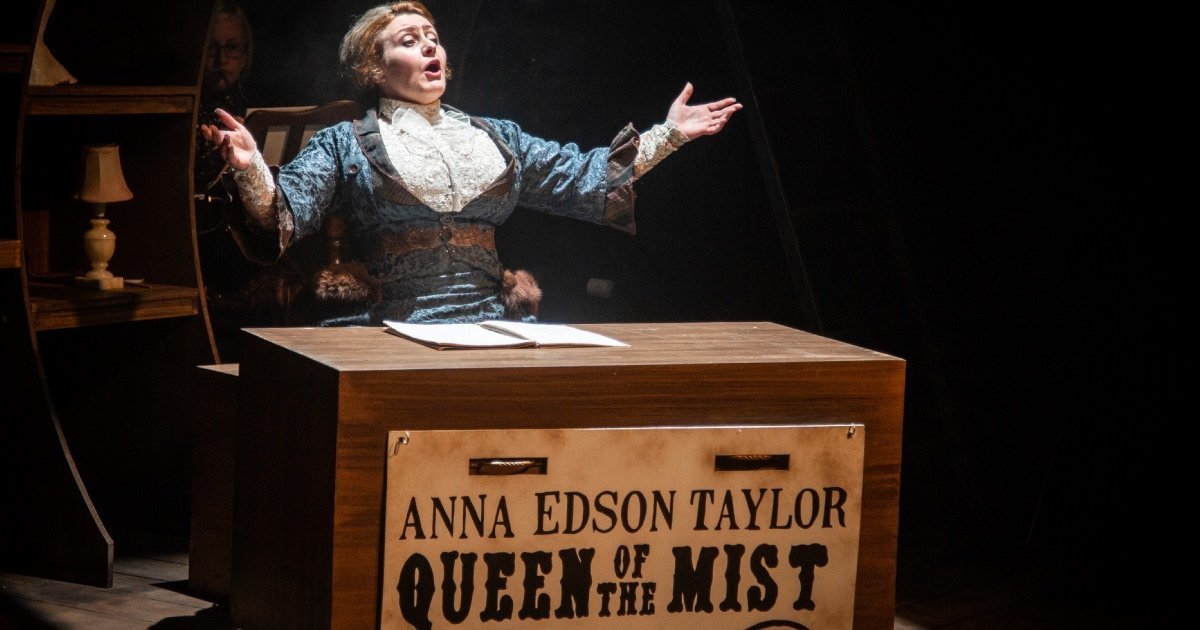 You climb Everest because it’s there. You trek to the South Pole to pit yourself against the daunting challenge of nature. And you wedge yourself into a barrel and allow yourself to be swept over Niagara Falls because… well
I’m not really sure. It’s brave – probably; it’s daring – indubitably; it’s heroic – arguably; and it’s completely fool-hardy but, hey, whatever floats your boat, eh? Or floats your barrel.

The falls at Niagara are magnificent – note to prospective visitors, view from the Canadian side, rather than the US side to get the full all-encompassing panoramic experience. And, of course, go out in a boat, complete with plastic poncho, and sail through, and get soaked by, the mist. Yes, the mist: it’s constant, it’s eerie, it’s timeless and it’s one of natures great wonders.

You might think there was not much of a story to be made out of a swift descent in a barrel over the horseshoe falls at Niagara. And you would be right: there isn’t. But writer/composer Michael John LaChiusa manages to
spin it out to well over a couple of hours which put me in mind of the Pet Shop Boys lyric “You’ve made such a little go a very long way”. In 1901, on her 63rd birthday, Anna Edson Taylor climbed into her self-designed barrel and shot the falls. For this adventure she named herself “Queen of the Mist” with the intention of making her fortune. She didn’t. After the event, she toured the country selling postcards of herself and died in poverty. That’s it really. We hear nothing of her preceding life other than that she was an itinerant debtor. Much is made of her “scientific” approach but we are given no evidence of this other than her song “There is greatness in me”. And, rather like Hamilton, all the action takes place in the first half and then the recriminations come in the second.

I say “all the action” and by that, we’re talking about “the Deed” as she calls it and this was the most disappointing aspect of the show. As we enter the auditorium we see the famous barrel, spotlit, with mist swirling around it. In a story about a woman who propels herself over such a wondrous cascade in a barrel the one thing we want to see, we must see, is said woman in barrel dropping 187 feet over falls crashing into the swirling waters and maybe even the treacherous rocks below – through the strikingly-staged spectacular portrayal of such. So naturally, we want to see the Queen of the Mist dramatically helped into it the barrel, head bobbing out of the top (before it’s screwed down), anguish etched into her face with onlookers fearful and excited at the same time. And as she sets off we want to see an enthralling theatrical representation of this momentous event. Is that what we get? Not a chance. No barrel. A perfunctory removal of her dress. Slight light change.

Some low-key singing. Blackout. Interval. I imagine – in fact I hope – that Lighting Designer Beth Gupwell was screaming at director Dom O’Hanlon “We need to make this sequence dramatic: I can make it happen! Give me a strobe, Dom, some LED colour changers, a smoke machine (in the barrel!) and maybe a laser – all basic technical (inexpensive) fare in today’s theatre – get Adrian Jeakins (Sound Designer) to add some FX and we’ll give the
audience a frightening, white-knuckle, spine-tingling experience that will live with them for years!” But presumably O’Hanlon just wasn’t interested. No barrel. No screams (surely she would have screamed a bit?). No excitement.

Trudi Camilleri takes the role of Anna and quite easily convinces us that she was a thoroughly unpleasant woman – brash, egocentric, unforgiving and a fervent believer in her own publicity. It’s a full-on characterisation with a distinct absence of light and shade and a dearth of subtlety. Camilleri has a strong, strident voice that derives from the fingers-scraping-blackboard school of intonation and is often difficult to listen too comfortably and there’s a sneaking suspicion that, in LaChiusa’s compelling but challenging score, there are some notes she just can’t get. At the end as Anna is dying – don’t think that’s a spoiler – the show is making a deliberate attempt to elicit some sympathy for the character – a tough ask for someone who has absolutely no redeeming features at all. The fact that Camilleri sings the final number – “The Fall”, a beautifully written heartfelt song – in exactly the same manner as all the others is never going to help with that.

Camilleri is supported by a willing but woefully underemployed ensemble: Will Arundell as Anna’s manager, Frank Russell, takes the eye and has a lovely voice as heard particularly in his song “Expectations” and Emily Juler, in various roles including Anna’s sister Jane, is excellent. But the idea that an ensemble can interminably perambulate the stage holding suitcases is the theatrical equivalent of painting by numbers. No Choreographer is credited so that has to be down to Director O’Hanlon again. At least, in the second half, they ditch the suitcases for a while and instead prance around with… chairs. It may sound harsh but, frankly, it’s Junior Drama Club fare – on the Off West End Stage.

I have no doubt that many people will find the show historically interesting and, for the most part, a pleasant listen – the excellent band is led by Musical Director Connor Fogel. But in my view, it’s too long and lacks the excitement that such a story should present. I would actually switch around the two acts, first seeing Anna after the event and then flashing back to the event itself, building up to a (hopefully much better represented) climax as she shoots the falls. And I’d employ a choreographer. At present, the movement in the show is, well, how can I put this… scraping the barrel?

Pint of Wine Theatre Company’s acclaimed production of Michael John LaChiusa’s Queen Of The Mist comes to the Charing Cross Theatre for a strictly limited seven-week season from 15 August to 5 October 2019. Queen Of The Mist, which received its UK premiere in a sold-out run at the Jack Studio Theatre in April, is based on the astounding and outrageous true story of Anna Edson Taylor, who in 1901 on her 63rd birthday set out to be the first person to survive a trip over Niagara Falls in a barrel of her own design. With a soaring score that incorporates turn of the century themes with LaChiusa’s insightful and engaging style, this award-winning musical is the story of how one woman risked death so that she could live.

The original 2011 Off-Broadway production of Queen Of The Mist won the Outer Critics Circle Award for Outstanding New Off-Broadway Musical and was nominated for six Drama Desk Awards, including Outstanding Musical.