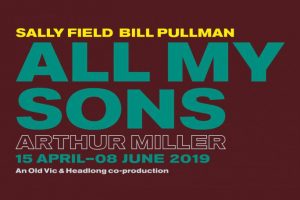 You don’t realise how people can hate, Chris, they can hate so much they’ll tear the world to pieces…’

America, 1947. Despite hard choices and even harder knocks, Joe and Kate Keller are a success story. They have built a home, raised two sons and established a thriving business.

But nothing lasts forever and their contented lives, already shadowed by the loss of their eldest boy to war, are about to shatter. With the return of a figure from the past, long buried truths are forced to the surface and the price of their American dream is laid bare.

The Theatre was constructed on former marshland that was Lambeth Marsh and it took many years to build due to a serious lack of money. The Foundation stone was laid by the Prince of Saxe-Coburg and Princess Charlotte of Wales in September 1816, hence the Old Vic began life as The Royal Coburg, guaranteeing the nobility and the gentry “entirely new entertainment”. 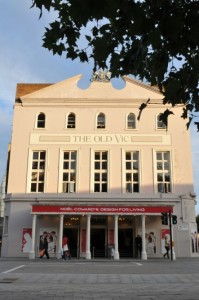 On the opening night 0n Monday 11th May 1818, Melodrama, an Asiatic ballet and a Harlequinade were the evenings entertainment. There followed later on in 1831 Edmund Kean’s plays Richard III, Othello, Macbeth and King Lear in a six-night appointment. 1833 saw the theatre re-opened ‘for the encouragement of Native Dramatic Talent’, and re-named The Royal Victoria, in honour of Princess Victoria. Afterwards, in 1871, the theatre once again re-opens and this time as The New Victoria. In the 1870s it was twice put up for sale by auction, before closing down.The Victorian social reformist Emma Cons, opens the theatre in 1880, as The Royal Victoria Coffee and Music Hall, with the word ‘theatre’ being dropped purportedly because of its ‘impure associations’. Philanthropist Samuel Morley prevented the theatre from closing down in 1884 and renamed it The Royal Victoria Hall and Coffee Tavern.

From 1929-31 John Gielgud’s Hamlet and Richard II established him as the new Shakespearean star. In 1932 Peggy Ashcroft joins the company to play Juliet, Miranda, Portia and Rosalind. 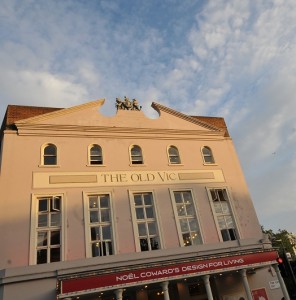 In 1936 Michael Redgrave, Alec Guinness and Laurence Olivier join the company. Michael Redgrave and Edith Evans perform in As you like it. In 1941 the theatre is badly damaged by German bombs.

After renovations, the theatre opens one more in 1950 with a performance of Twelfth Night. Judi Dench joins for the first of four seasons in 1957. Her roles include Hermia, Ophelia, and Juliet in Franco Zeffirelli’s Romeo and Juliet. In 1960, John Stride and Judi Dench starred in Romeo and Juliet.

The brilliant Laurence Olivier and Maggie Smith star in Othello in 1964. Unfortunately, in 1963 The Old Vic company dissolved, and under the artistic direction of Lord Olivier, the new National Theatre Company was established at the Old Vic until its own residence was opened on the South Bank in 1976.

In 1977 the theatre was leased to visiting companies with the first production being The White Devil, starring Glenda Jackson. The theatre is put up for sale in 1982 and bought by Canadian businessman Ed Mirvish who restored it to its former glory.

During 1998 the Mirvish family wish to sell the theatre. There are proposals for changing it into a themed pub, a bingo hall or a lap-dancing club. In response to political pressure and public demand, the theatre is taken over by The Old Vic Theatre Trust in 2000, and a registered charity set up by Sally Greene. The facade of the building is founded on an 1830 engraving while the auditorium is styled on the designs of 1871.

With The Old Vic now back to its former glory the theatre continues to produce spectacular shows.