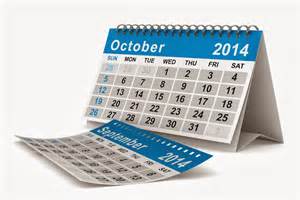 Halloween, Bonfire Night, and not forgetting that dreaded C-word – Christmas. These are the three main culprits which will be taking up everyone’s time and energy over the next few months, not to mention all the shelf space in the supermarkets. A wonderful distraction  from the hullabaloo of the holidays is the always joyful experience of live theatre, and theatre-goers are being particularly spoilt this October as ghosts, fireworks and a big, fat, jolly man in a flying sleigh are not the only things coming to town. There is an influx of new shows opening in the West End during the course of the next month, and always ready to lend a helping hand, we’ve highlighted some of the best of the upcoming arrivals for this London Theatre Preview.

NEVILLE’S ISLAND:
This star-studded revival of Tim Firth’s play transfers to the West End in October following its critically acclaimed regional run in 2013. Adrian Edmondson, Rufus Hound, John Marquez and Tim McMullan led the Chichester Festival Theatre production last year under the direction of  Angus Jackson, and now it’s back in the West End after an absence of 20 years – with a updated cast from that seen in Chichester. The Young Ones and Bottom actor Adrian Edmondson reprises his role of Gordon in the West End production, but is this time joined by comedian Miles Jupp (Angus), stage and screen star Neil Morrissey (Neville) and comedian/actor Robert Webb (Roy), who was recently seen in Jeeves and Wooster in Perfect Nonsense. The show follows the misadventures of four out-of-condition, out of-their-depth businessmen on an out-of-control team-building exercise. Shipwrecked in the Lake District, menaced by wildlife and with only a sausage between them, our unlikely explorers battle the elements and each other as corporate bonding descends into a hilarious carnival of squabbling, French cricket and cagoules. Produced by Jamie Hendry Productions, the play opens at the Duke of York’s Theatre on 21st October 2014 (previews from 10th October) and runs until 3rd January 2015.

SPEED-THE-PLOW:
David Mamet’s 1988 play about the American movie business has received a lot of attention since it was announced that Hollywood wild-child Lindsay Lohan would be making her West End début in the new London production. The action begins with film producers Bobby Gould and Charlie Fox, who are convinced they’re about to make the break of a lifetime when a hugely bankable star agreeing to appear in a sure-fire commercial hit. Temporary secretary Karen persuades Bobby to dump the project in favour of a story that will be box-office poison however, forcing Charlie to resort to desperate measures. Lindsay Lohan stars as Karen in the show, playing opposite Richard Schiff as Bobby and Nigel Lindsay as Charlie. Produced by Danny Moar and Simon Friend for Theatre Royal Bath Productions, Speed-The-Plow opened at the Playhouse Theatre on 2nd October 2014 (previews from 24th September). The production is due to run until 29th November 2014.

THE TRIALS OF OSCAR WILDE:
Presented by John O’Connor for European Arts Company, who also co-wrote the play with Wilde’s grandson Merlin Holland, this production is transferring to the West End following a successful UK tour and a previous run at the St James Studio. Using the actual words spoken in court, it explores the trials of esteemed playwright Oscar Wilde, who found himself imprisoned and subsequently sentenced to two years hard labour shortly after the triumphant opening night of The Importance of Being Earnest. What happened during the trials and what did Wilde say? Was he harshly treated or the author of his own downfall? Starring in the dramatization of his libel and criminal trials are John Gorick, Rupert Mason and William Kempsell, under the direction of Peter Craze. The Trials of Oscar Wilde has one preview performance at Trafalgar Studios 2 (on 13th October) before opening on 14th October 2014. The production is there for a limited four-week run, which sees it close 8th November 2014.

EAST IS EAST:
Ayub Khan-Din’s comedy-drama, which was first seen in London at the Royal Court Theatre in 1997, is often more recognised for its award-winning 1999 film adaption of the same name. The Olivier Award-nominated play is set to change that though as it returns with a brand new production as part of Jamie Lloyd’s second Trafalgar Transformed season. The story is set in 1970’s Salford and based around the Khan family, headed by Pakistani chip shop owner George Khan who is determined to give his children a strict Muslim upbringing. His long-suffering English wife finds herself caught in the middle however, as she finds her loyalties divided between her marriage and her children’s free will. Directed by Sam Yates, the show stars Jane Horrocks  as Ella Khan opposite playwright and actor Ayub Khan-Din as George Khan. Alongside them in the cast are Amit Shah (Abdul Khan), Ashley Kumar (Tariq Khan), Darren Kuppan (Maneer Khan), Nathan Clarke (Saleem Khan), Taj Atwal (Meenah Khan), Michael Karim (Sajot Khan), Sally Bankes (Auntie Annie), Rani Moorthy (Mrs Shah) and Hassani Shapi (Mr Shah/Doctor), with the addition of ensemble members Ash Rizi, Karl Seth, Deepal Parmar, and Pamela Bennett. East Is East began previews on 4th October 2014 and is set to open at Trafalgar Studios 1 on 15th October 2014. It runs there until 3rd January 2015.

THE SCOTTSBORO BOYS:
This musical, based on the Scottsboro Boys trial, was one of the last shows that the composing duo John Kander and Fred Ebb collaborated on. Featuring music by John Kander and lyrics by Fred Ebb, as well as a book by David Thompson, it is based on the true story of nine young black men, aged between 12 and 19, travelling on a train through Scottsboro, Alabama in 1931 in search of a new life. By the end of their journey their lives had been changed forever. Wrongly accused of an unspeakable crime, their crime would divide a nation. But behind the screaming headlines was the devastating story of nine young men, desperate to prove to the world that they mattered. Leading the production are Brandon Victor Dixon (Haywood Patterson), Colman Domingo (Mr Bones), Forrest McClendon (Mr Tambo), James T Lane (Ozie Powell) and Julian Glover (The Interlocutor), with Dawn Hope, Dex Lee, Rohan Pinnock-Hamilton, Richard Pitt, Emile Ruddock and Carl Spencer also included in the cast. Produced by Catherine Schreiber, Paula Marie Black and Young Vic Productions, the show is directed and choreographed by Susan Stroman and also features orchestrations by Larry Hochman. After the Young Vic recreated the Olivier Award-nominated Broadway production last year, The Scottsboro Boys transfers into the West End to play at the Garrick Theatre, where it has been in previews since 4th October 2014. Opening night is on 20th October 2014 and it is currently booking until 21st February 2015.

SUNNY AFTERNOON:
The Kinks were one of the most influential music bands of the 60’s music scene and Sunny Afternoon, named after one of their most popular songs, tells the story of their rise to fame using an array of their greatest hits. The Kinks exploded onto the 60s music scene with a raw, energetic new sound that rocked a nation. But how did that happen, where exactly did they come from and what happened next? Set against the back-drop of a Britain caught mid-swing between the conservative 50s and riotous 60s, this production explores the euphoric highs and agonising lows of one of Britain’s most iconic bands and the irresistible music that influenced generations. The book is by Joe Penhall with an original story by Ray Davies, who also receives a music and lyrics credit – Davies of course founded the band with his brother, Dave Davies.  John Dagleish and George Maguire star as the London brothers, playing Ray Davies and Dave Davies respectively. Ned Derrington as Pete Quaife and Adam Sopp as Mick Avery complete the band line-up and are joined in the cast by Carly Anderson, Philip Bird, Ben Caplan, Lillie Flynn, Emily Goodenough, Vince Leigh, Amy Ross, Dominic Tighe and Tam Williams. Produced by Sonia Friedman Production with Greg Ripley-Duggan for Hampstead Theatre Productions, the jukebox musical is directed by Edward Hall and features  choreography by Adam Cooper. Kinks classics featured in the show include You Really Got Me, Waterloo Sunset and Lola, under the musical direction of Elliott Ware. Sunny Afternoon marks the 50th Anniversary year of the band’s début release and recently began previews at the Harold Pinter Theatre from 4th October 2014. The show opens on 28th October 2014 and is set to run through until 31st January 2015.

HERE LIES LOVE:
After a successful début in New York, this acclaimed new musical arrives in London this October for a strictly limited run at the National. Here Lies Love traces the astonishing journey of Imelda Marcos, First Lady of the Philippines, from her meteoric rise to power to descent into infamy and disgrace. The show is directed by Alex Timbers and stars Natalie Mendoza as Imelda Marcos, who features alongside Mark Bautista as Ferdinand Marcos and Dean John-Wilson as Ninoy Aquino, with the additional cast of Gia Macuja Atchison, Lauren Chia, Christopher Chung, Julius Ebreo, Jim Ferrer, Li-Tong Hsu, Kok-Hwa Lie, Frances Mayli McCann, Aaron Jan Mercado, Martin Sarreal, Julie Yammanee and Sunny Yeo. Produced by National Theatre and Public Theater NY, and presented by special arrangement with Joey Parnes and EMURSIVE, also includes choreography by Annie-B Parson and projection design by Peter Nigrini. Kimberly Grigsby is music supervisor, Justin Levine the collaborating music producer, and Matt Stine the music editor. Here Lies Love has been in previews since 30th September 2014 at the National’s Dorfman Theatre , which has been transformed into a pulsating club for an immersive theatrical event which combines heart-pounding beats with adrenaline-fuelled choreography and 360-degree staging. It opens at the National on 13th October 2014 and runs there until 8th January 2015.

ROMEO AND JULIET:
William Shakespeare’s timeless love story has been adapted by writer Ben Power for a younger audience, between the ages of 8-12 years. A modern city. A  deadly feud. And a pair of star-crossed lovers. Set against an vibrant urban backdrop, bursting with excitement, colour, dancing and live song, a company of eight recreate the most famous love story of all time. This contemporary take on Romeo and Juliet stars Vanessa Babirye, Sheena Bhattessa, Joanna Burnett, Ashley Chin, Tendayi Jembere, Bunmi Mojekwu, Umar Pasha and Mitesh Soni, and is directed by Bijan Sheibani. This in-house production opens at the National Theatre’s Temporary Space on 29th October 2014 and plays there until 14th November 2014.