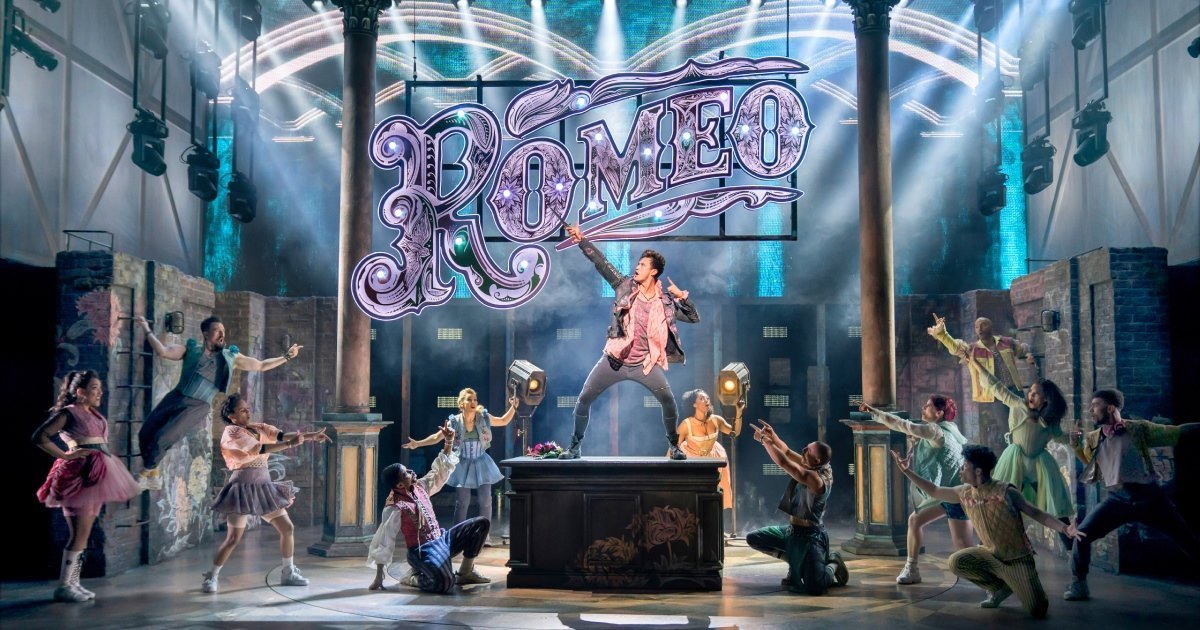 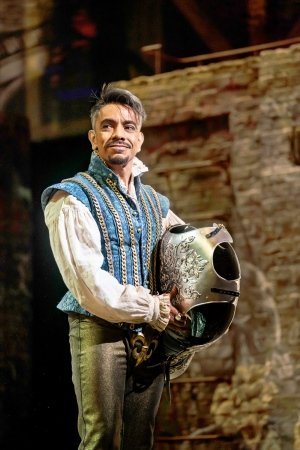 Everyone is familiar with the story of Romeo and Juliet by William Shakespeare. Yet this new musical & Juliet takes this classic story, shakes it up and breathes literally new life back into the old tale.

Imagine if the two had not died and a new future was written for them. Well, here you have Juliet played by the incredibly talented Miriam Teak-Lee who is saved from death by Anne Hathaway (Cassidy Janson). Fed up with William (Oliver Tompsett) spending all of his time ‘in bed with the arts’ he so loves, she rewrites the story with him to rekindle some passion between them. The audience watches as the pair banter and joke with one another as they narrate and star in this new musical adaptation. To have the couple narrating together must be challenging at times but these two have a fantastic rapport and the storyline is incredibly polished.

The life of Shakespeare is constantly referred to throughout the musical and the facts as far as I am aware are accurate. It’s a history lesson in Shakespeare’s life as well as a thoroughly enjoyable musical.

The musical numbers are plentiful with so many easily recognizable ones to sing along too. From Britney Spears’ hit ‘Oops!… I did it again’, Justin Timberlake’s hit from Gnomeo and Juliet ‘Can’t stop the feeling’ to the hit boy band number ‘Everybody’ by Backstreet Boys or Bois as it translates to in the musical. These numbers rocked the theatre and the applause at the end of the boys’ number was certainly the loudest all evening.

Luke Sheppard has directed a modern musical that has real potential to take the West End by storm with a gender-balanced script which embraces Juliet as a free-thinking modern protagonist and it’s vibrant, energy fuelled numbers will leave you singing on the way home. He has bought this well-known play twisted it into a musical and placed it straight into this decade acting like it just doesn’t care.

A timely and timeless tale of one independent young woman, & Juliet is a riotous comic blast of fun and glorious pop music that proves when it comes to love, there’s always life after Romeo…

Brought to life by an award-winning creative team in an explosive fusion of styles, & Juliet is directed by Luke Sheppard (In the Heights) with a book by David West Read (Schitt’s Creek), electrifying choreography from Jennifer Weber, stunning set design from Soutra Gilmour and costume design by Paloma Young.

Soaring with the music of Max Martin, the acclaimed song-writer of some of the biggest pop anthems of the last 30 years, & Juliet stars Miriam-Teak Lee as Juliet, Cassidy Janson as Anne Hathaway, Olivier Tompsett as William Shakespeare, Arun Blair-Mangat as May, David Badella as Lance, Melanie La Barrie as Nurse, Jordan Luke Gage as Romeo and Tim Mahendran as Francois.