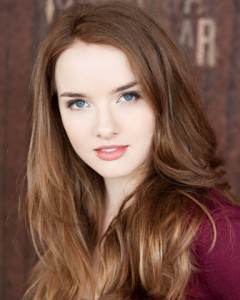 Earlier this week Anna answered some questions about herself, her career and her role in The Phantom of The Opera.

Did anyone in particular inspire you towards a career in the performing arts?
My sister. She is a rather brilliant lawyer these days, but I started falling in love with theatre when I saw her performing in plays and musicals at school. My first drama teacher was also a huge influence on me as a performer and as a person – I still use what she taught me onstage, and more importantly, in life.

You trained at the Victorian College of the Arts in Melbourne, Australia. What are your favourite memories of your time there?
I have so many fond memories of my four years at the VCA, and I feel very lucky to have been there at that particular point in time. The VCA is unique, I think, because it’s quite a small college, but you’re surrounded by people from different areas of the arts – animators, directors, musicians, printmakers, actors, composers, the list goes on. It was a very inspiring environment to be in, and the performance opportunities were amazing. I loved just mucking in and singing at every chance I got. There were only 11 students in my year, all of different ages and from different backgrounds, so we were a very diverse group but also very close. We laughed a LOT. The VCA also brought me to an incredible lady, Anna Connolly, who is still my singing teacher and mentor to this day.

Shortly after completing your degree you were cast in the Australian production of The Phantom of The Opera where you covered and played the role of Christine Daaé. How did it feel to be cast in such a role so soon after graduating?
It was completely unexpected – a real surprise. I had been offered about a year’s worth of work in the opera world, which I was over the moon about, but it was actually one of my opera coaches who suggested me for Phantom when the opportunity came up. I had 12 hours to prepare for my audition, and once I had been offered and decided to take the role, I was on tour and learning my parts within a month. It was a very hard decision between Phantom and working for the various opera companies that had offered me roles – but I always believe you have to follow your gut instinct. Phantom is such a fantastic show to “learn the ropes” on – I really feel that I did my apprenticeship there, so to speak. It was a great company to be a part of. I barely remember the first time I went on as Christine, I was running on pure adrenalin, but I do remember it being just the most exhilarating experience. Touring can be exhausting, but it’s so much fun. It was a really happy time in my life and I made some firm friendships and great professional relationships that last to this day.

You created the role of Christine Daaé in the Australian production of Love Never Dies. How do you feel the role of Christine had evolved?
I feel so fortunate to have had the chance to develop Christine’s character in Love Never Dies. I also felt, and still feel, a great deal of responsibility, as I know how important these characters are to a lot of people. Our rehearsal process on Love Never Dies was quite collaborative, in the sense that Simon Phillips was very open to the actors having opinions and ideas on how to take these characters forward. For example, there is a point before the Phantom reappears to Christine after 10 years – initially, in the libretto, Christine was meant to wind up a music box that her son has been playing with and it plays one of The Phantom’s main musical themes. I said to Simon that I felt very strongly that the music box should start playing of its own accord, as soon as Christine is alone. The next day at rehearsal, Simon made a comically annoyed face at me and said he had been up half the night talking to our designer and props team, figuring out how to make the music box play by itself! They did figure it out, and that’s the version that is in the show today. In terms of character though, the biggest evolution was playing Christine as a mum. It was extremely fulfilling for me to explore that relationship with the eight boys who played Gustave in our production. They all played the role slightly differently, and that in turn would influence how Ben Lewis and I played our relationship as The Phantom and Christine. It was so beautiful for me to see Christine as a parent. The Phantom of the Opera is so much about Christine dealing with the grief of losing her father and desperately searching for guidance from the male figures in her life. But seeing her come into her own by the end of Phantom of the Opera, and then to see her become a parent herself in Love Never Dies and share this wonderful connection with a little soul that she would ultimately give her life for – for me that was the most incredible thing to play each night.

You are a successful opera singer and concert artist. Which performances would you say are the most special to you?
All of them!

I understand that you have a passion for French Art Song. What can you tell us about this?
I fell in love with French Art Song during my time at the VCA. I ended up writing my honours thesis on Francis Poulenc, who wrote some seriously beautiful art songs. I adore his music and still sing a lot of it!

You are currently performing as Christine Daaé in The Phantom of The Opera at Her Majesty’s Theatre London. How has this differed from you playing the role in Australia?
Well, obviously I am performing the show with a completely different group of people and in completely different circumstances. I was determined not to shoehorn my previous experiences with Phantom and Love Never Dies into this one – I tried to wipe the slate clean. Fortunately, I learned the show here with a new Phantom (Marcus Lovett) and Raoul (Simon Thomas) – as well as many other new company members – so we really had the chance to develop our own relationships with the roles and with each other. Of course I have strong opinions on the character of Christine and her growth through the course of her story – but I never walk onstage thinking “Oh, this is how I’m going to play Christine tonight”. We have a wonderful Resident Creative Team at Her Majesty’s who all care very deeply about the show, and we are all allowed the freedom to experiment.

How do you try to make Christine unique to you?
It’s always been important to me that Christine has an intense passion within her. I love playing the feisty side of her – to me, this fire is what draws her and connects her so intrinsically to The Phantom. She is also a character that has a profound, sort of strangely beautiful sadness about her. I have loved discovering her innocence and impressionability again. It’s also very important to me that she has a sense of humour – I remember Simon Phillips saying to me in a very early rehearsal of Love Never Dies, “I want her to laugh as much as possible” – so we put in these silly “mum” moments where she and Gustave would wiggle each other’s noses, or she would do a funny little walk to make him laugh. In Phantom of the Opera, I like to show her being a bit giggly and mischievous with Meg. Simon felt that she should “laugh ruefully” – I like that concept to describe her. But ultimately these things are organic and who knows how I might be playing her a few months from now! That’s part of the fun of it all!

What is it that you like best about playing the role of Christine?
Different things each night. I love her compassion. I love her relationship with music. I deeply love singing both scores! The role of Christine (in both Phantom of the Opera and Love Never Dies) is a huge challenge – physically, vocally, emotionally – and it’s so satisfying to find the stamina to face that challenge head on!

If you could choose your favourite characteristics from The Phantom and from Raoul – what would they be?
They both love her unconditionally – I think that’s a pretty endearing characteristic! I love The Phantom’s passion and intensity, and I love Raoul’s nobility and sincerity. They are both quite powerful characters and in a way they are like two sides of the same coin. I think that’s what makes the love triangle so effective.

If you could develop any other character in The Phantom of The Opera and write a musical based on them who would it be?
The Little Band – they are so playful in Masquerade, but they are also quite sinister.

Can the reaction of the audience influence your performance?
Not really. I always feel an initial “rush” from the audience when I first come onstage, but after that I figure we’re all along for the ride together.

What is life like backstage at Her Majesty’s Theatre?
Lovely! Quite calm. Things have been ticking along very smoothly for 26 years now, so it’s very easy to slot into life backstage and just concentrate on giving a great show each night. Truth be told, I don’t get to spend much time backstage – it’s quite a busy show for me!

How does the London audience compare to that in Melbourne, Australia?
There is a much bigger tourist component here in the West End. It’s very cool meeting people at Stage Door who have flown internationally to see the show at Her Majesty’s. Melbourne is my hometown though, so it’s always a special experience to perform there.

I believe that you are an avid reader. What book are you currently reading?
I am! I just finished an anthology of Heinrich von Kleist’s short stories and I was blown away – they were written in the early 1800s but they are frighteningly modern and quite confronting. I churned through The Hunger Games trilogy when I was ill for a few days recently, and it more than lived up to the hype. I’ve just begun Loving by Henry Green and I am learning so much from how he writes dialogue – just brilliant.

Looking to the future, do you have any particular role you would like to perform or show you would like to be in?
I love Street Scene by Kurt Weill. I’m dying to do some Sondheim or Rodgers and Hammerstein, or some Bernstein or Guettel. It will bring me great joy to go back to Mozart and Handel one day! I played violin for many years and I would love to be a part of a show where I can use that skill in some way. But the totally wonderful thing about our industry is that you never quite know what’s around the corner, and that can be the most thrilling ride of all.

Away from the stage, what do you like to do to chill out?
I’m blessed to have a very close family, so I love spending time with them and with my friends. You might have guessed that I read a lot! Writing is another huge passion of mine. I like running and yoga. I also like shopping! A little too much!

Any message to those that are following your career?
Thank you! Your support means a great deal to me. Please come say hello if you find yourself at Her Majesty’s. Much love.