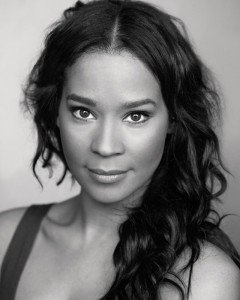 The West End is home to some of the best musical theatre performers in the world, and alongside the established leading men and ladies of the stage, there are many up-and-coming talents who just may be the stars of tomorrow. One such West End star-in-the-making is Holly James, who is also the featured performer in this edition of In Profile.

Holly James received her training courtesy of one of the finest performing arts schools in the UK: Urdang Academy. Upon graduation, she joined a list of alumni that includes such fellow West End performers as Victoria Hamilton-Barritt, David Page, Leanne Pinder and Nathan Amzi.

Her training at the Academy provided her with a solid base upon which to build a professional stage career, and she is doing just that. One of her earliest roles came in the 2005 production of The Genius of Ray Charles at the Theatre Royal Haymarket, performing in the ensemble in the musical tribute to the late singer. She then went on to appear in her first tour production, travelling around the country as part of the UK tour of Starlight Express. She strapped on her skates with the rest of the cast to play the role of Joule, the dynamite truck of ‘Engine of the Future’ Electra, in the popular Andrew Lloyd Webber musical.

She was back in the West End in 2006, performing at the Savoy Theatre in Trevor Nunn’s revival of the Gershwin’s Porgy and Bess as a swing, and also dance captain for the production. The production was led by Clarke Peters and Nicola Hughes in the titles roles and generally well received, but was ultimately unable to survive on good reviews alone and ended its run five months early on 5th May 2007.

The musical’s premature closure didn’t stop James though. She continued making strides in the industry by joining the company of another West End show, this time in the original London production of Hairspray! at the Shaftesbury Theatre. Opening on 11th October 2007, she performed as one of the Dynamites and appeared alongside a stellar cast which included Michael Ball (Edna Turnblad), Mel Smith (Wilbur Turnblad), Rachel Wooding (Amber), Ben James-Ellis (Link) and then-newcomer Leanne Jones as Tracy. The production won several Olivier Awards, including ‘Best New Musical’ and ran for nearly two and a half years.

After spending a year in the show she went back on the road with the UK tour of Fame, in which she played the role of dancer Carmen Diaz. She then continued her travels by joining the stadium tour of the musical Cats, playing the principal role of the ‘skittish’ Demeter.

In 2009, she was part of the Peter Pan musical adaption at The Curve, Leicester. Starring Spencer Charles Noll in the title role, the show was well received and James herself was praised for her performance as the Native American princess Tiger Lilly.

She then returned to the West End to perform in the Broadway transfer of Hair at the Gielgud Theatre. She appeared as a member of the show’s ensemble and was also understudy to the leading role of Dionne. She then appeared at Sadlers Wells in Stephen Mear’s Shoes as a featured dancer, alongside former Hair cast mate Patrick Smyth. After a successful run there, the musical then transferred to the Peacock Theatre – with James in tow – for a limited 8-week engagement

Her next musical theatre venture was the 2011 revival of Schwartz’s Pippin at the Menier Chocolate Factory. She had an ensemble role in this contemporary re-telling which also featured Harry Hepple, Frances Ruffelle and Matt Rawle in the cast. Following that, she joined the Chichester Festival Theatre’s production of Kiss Me Kate in the summer of 2012. A popular piece of musical theatre, the CFT revival of this award-winning musical hugely benefitted from the contributions of director Trevor Nunn and choreographer Stephen Mear, as well as a talented cast which included Hannah Waddingham, Clive Rowe, and of course, Holly James in an ensemble role. She also understudied the role of Hattie. The acclaimed production subsequently transferred to the Old Vic Theatre at the end of 2012.

The West End stage called her home once again in 2012 when she appeared at the Adelphi Theatre as part of the original London company of The Bodyguard. The stage musical starred Lloyd Owen and Heather Headley in the roles made famous by Kevin Costner and Whitney Houston in the 1992 film, with James performing in the ensemble and also covering the principal role of Nicki Marron.

She spent just under a year in the show before moving on to take on the role of Christine in the world premiere of American Psycho. The musical adaption was directed by Rupert Goold and starred Doctor Who actor Matt Smith, and opened at the Almeida Theatre 12th December 2013 (previews from 3rd Dec). Its sold-out run was extended due to popular demand and the production played its final performance on 1st February 2014.

Her other credits include soloist in La Varite at the Hackney Empire, and guest vocalist in Michael Ball’s Heroes tour in the UK. She was also once a member of the four-piece girl band, Tymes 4, which had two Top 40 hits, including their debut single ‘Bodyrock’. She left the band in 2002 to pursue a solo career and also to try her hand at acting. She featured as Girl in Car in the music video for ‘Ayo Technology’ with Justin Timberlake and 50 Cent and was a singer on Jason Nevin’s No. 7 hit, ‘I’m in Heaven’.

She was most recently seen playing an ensemble role in the musical Wonder.land at Manchester International Festival/Palace Theatre.

Holly James is a wonderful talent who continues to make her name for herself on the West End stage.