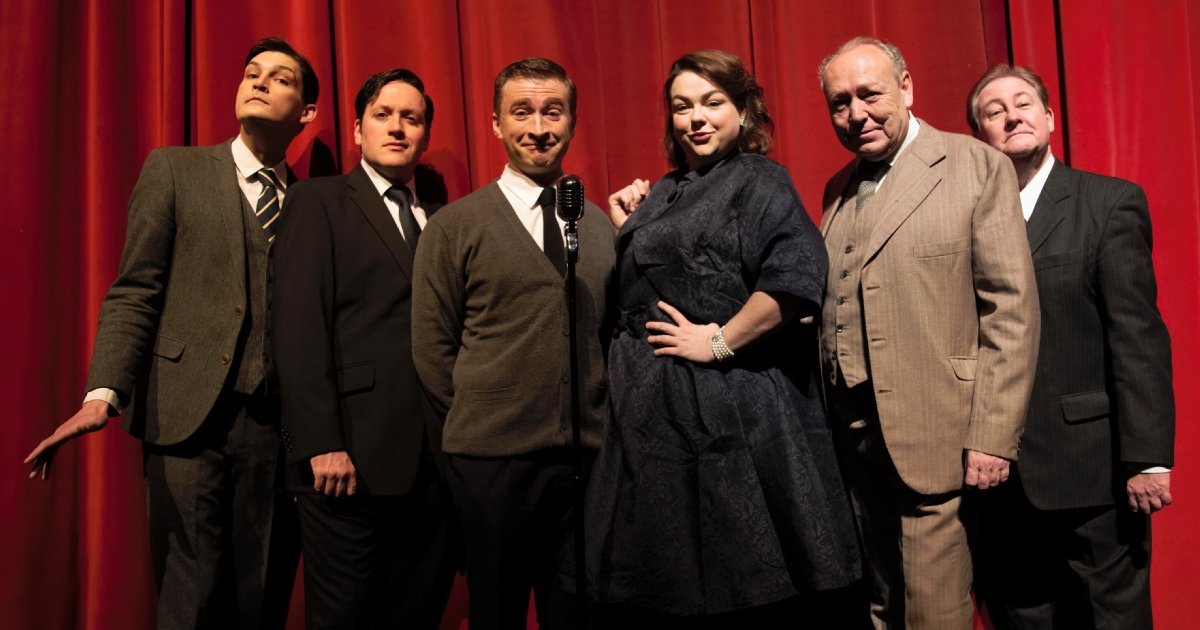 Tony Hancock made the first series of Hancock’s Half Hour for BBC radio in 1954, the scripts were written by two new writers still in their twenties; Ray Galton and Alan Simpson. Galton and Simpson went on to be one of the most successful comedy writing partners ever, most notably as the writers of Steptoe and Son. Later the television version of Hancock’s Half Hour would attract audiences of 20 million. Hancock’s character was a pompous and gullible version of himself, he didn’t tell jokes, the comedy came from the character Anthony Aloysius St John Hancock and his talented supporting cast.

Three episodes of Hancock’s Half Hour have been brought to the stage by director Tim Astley; there is also a short extract from ‘The Blood Donor’ which was the only piece I was familiar with. As with Apollo Theatre’s previous successful shows Round the Horne and The Goon Show, the audience is reminded that this is radio and to make sure that if they are enjoying themselves they should make it audibly clear to the listening audience.

The first episode to be recreated is ‘Hancock in the Police’ which begins with Hancock’s secretary Miss Pugh (Laura Crowhurst as Hattie Jacques) reading through the situations vacant column trying to find a job for Hancock (James Hurn) and his lodger (Tom Capper as Bill Kerr). It is strange to remember that Policemen had to be over 5 foot 9 once’ but that and any other rules could be disregarded for the right price. When Ben Craze, as Sid James, first speaks the audience explodes into spontaneous laughter as his portrayal of Sid James is so accurate.

The second episode ‘The Americans hit town’ is about American forces coming over to join the war effort and the effect that had on the British Public. It seems everyone was either hoping to make some money out of the Yanks or marry one and escape to America with them. Many of the fat girl jokes are rather offensive to modern ears but much of the comedy still works. Colin Elmer’s performance as Kenneth Williams is brilliant, I was particularly impressed as I also saw him playing Spike Milligan in Apollo’s ‘The Goon Show’ and he was almost unrecognisable!

The third episode ‘The Wild Man of the Woods’ is about Hancock wanting to get away from modern life and live a simple existence in the woods and of course how Sid James makes money out of the situation.

This was a hugely entertaining evening; I hadn’t heard any of these episodes and they were as funny today as when they were written. I would like to thank Tim Astley for bringing these great scripts to the attention of a new audience.

TONY HANCOCK fans will be in their element this autumn as the first ever UK tour of the classic radio comedy Hancock’s Half Hour opens at the Richmond Theatre on 28th January, before touring to theatres across the country, culminating in a special gala performance at the Leicester Square Theatre, London on 7th April.

In 1954, Tony Hancock burst onto the airwaves of the BBC Light Programme with a comedy show unlike anything the British public had heard before. Playing a less successful version of himself and surrounded by a cast of fellow comedy greats including Sid James, Hattie Jacques and Kenneth Williams, Hancock’s Half Hour was one of the first programmes in the genre we now know as sitcom.

Written by young up-and-comers Ray Galton and Alan Simpson, who later went on to create Steptoe and Son, Hancock’s Half Hour redefined radio comedy and has had people laughing non-stop for the past 65 years. Now, 65 years after its first broadcast, Apollo Theatre Company, who recently produced UK tours of classic radio comedies, The Goon Show and Round the Horne, bring the show to the stage for the first time.