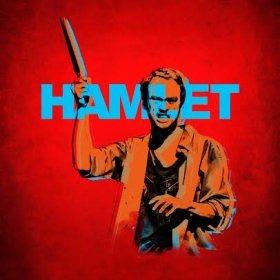 I haven’t seen a full production of Hamlet since I was at school, so I thought I’d approach director Kelly Hunter’s much-acclaimed production as if it was a piece of new writing and see if it had any resonance in the 21st century.

As the audience enters the auditorium, like many plays these days there’s already an actor on stage. It turns out this is Hamlet sitting on a leather sofa going through a box of photographs. We then hear the play’s famous first words “Who’s there?” spoken not by Bernardo as in most productions but by Hamlet as this is a stripped down, ninety minute “accessible” version of the play with just six actors and seven characters. Whole swathes of the text have been cut as well as thirteen characters – in this version, Rosencrantz and Guildenstern are dead for all intents and purposes.

Then the action proper begins and it seems we are at a drunken party as one of the actors plays the ukulele and another hits an upturned plastic bucket with some drumsticks. They are all in modern dress with the three other men and two women in party finery – Hamlet is barefoot in a tee-shirt and jeans.

Under other circumstances, this might have been called Hamlet-lite but lite it certainly isn’t! It may be only ninety minutes long but it’s a very intense and full-on ninety minutes. Better scholars and critics than I have analysed the play to death over the past 400 years or more, so I’m not going to try and do that here. The play has been cut down to the basics and shows one man’s descent into madness brought on by the weight of what he feels he must do to revenge the death of his father.

But I have to admit to being confused at certain points during the play. Why does Hamlet break into John Lennon’s “Mother” followed by a few bars of Cat Steven’s “Father & Son”? I can see the point but it seemed to jar in the context of the rest of the piece. Also, there’s a scene where Hamlet gets the rest of the characters to sit in a circle and play a game of “Who killed the king” that’s spoken in contemporary English which didn’t sit well with the rest of Shakespeare’s text. And most confusing of all – why when speaking one of the play’s most famous speeches “Alas poor Yorick I knew him well” was Yorick’s skull that of a dog rather than that of a human?

However, the acting of the six-strong cast is exemplary. Mark Arends as Hamlet brings a tightly coiled energy to the part and his intensity never wavers. He would also win an award (if there was one) for Best Feet Acting In A Play! As I said earlier, he’s barefoot throughout and he seems to use his feet and his especially his toes to express his grief, anger and madness. Francesca Zoutewelle is wonderful as “Ophelia” and her mad scene is seared into my memory. Finlay Cormack as “Laertes”, David Fielder as both “Polonius” and “Gravedigger”, Katy Stephens as “Gertrude” and Tom Mannion as “Claudius” all give superb performances.

Without a doubt this is one of the greatest works of literature a story that does have resonance in the 21 st century – I’m just not sure this production brings total clarity to it.

Flute Theatre Company’s critically-acclaimed adaptation of Shakespeare’s Hamlet comes to the intimate space of Trafalgar Studios 2 this December in a co-production with English Touring Theatre.

This thrilling and bold production makes its West End premiere after wowing audiences across Europe.

Flute Theatre’s Hamlet delves deep into the divided self of the protagonist. The unique company of just 6 actors keep the essence of Shakespeare’s tragedy, condensing the action into the single, bloody night of Hamlet’s mother’s wedding. By dawn only a gravedigger will be alive…

This is Hamlet as you’ve never seen before. 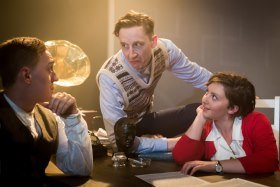 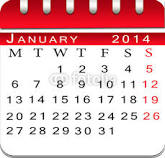 Today is New Years Eve, the time when we all say goodbye to 2013 and welcome in 2014. New Years Eve represents a fresh start, out with the old and in with the new, so to speak. The same rings true of theatre in the West End. We’ve had some masterpiece productions staged within the… 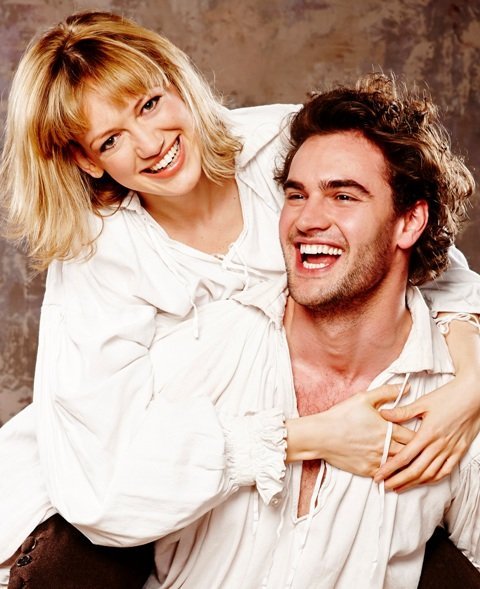