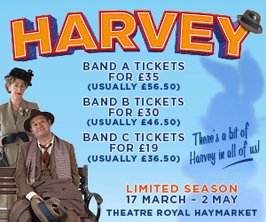 Elwood P. Dowd has only one character flaw: an unwavering friendship with a six foot tall, invisible rabbit, named Harvey.

This hilarious Pulitzer prize-winning comedy immortalised in the 1950 classic film starring James Stewart, was first produced on Broadway in 1944. This new production starsJames Dreyfus as Elwood P.Dowd (Notting Hill, Gimme Gimme Gimme, Donkey’s Years, Cabaret) and Maureen Lipman as Veta (films including Joyce! Up the Junction, Gumshoe, Educating Rita, The Pianist and theatre including Oklahoma! Peggy For You, Lost in Yonkers, Thoroughly Modern Millie and A Little Night Music).

There’s a bit of Harvey in all of us!