When you consider the vast wealth of literature available in the world, you sometimes have to wonder why playwrights decide that certain books should be turned into a piece of theatrical entertainment. For example, imagine taking a novel with around twenty-two listed characters and which the author originally divided into six distinct parts with an epilogue and then distilling all of this down to a ninety-minute one-act play three actors. Personally, I would have given up within the first five minutes. However, Marilyn Campbell and Curt Columbus have more fortitude than me and so, they gave the treatment to Fyodor Dostoyevsky’s 1866 novel Crime and Punishment and the result of their work can be seen at Brockley’s famous Jack Studio Theatre.

The play starts with two men in an office. Rodion Romanovich Raskolnikov, (Christopher Tester) is a young man who, going by his unkempt appearance, seems to be down on his luck and also seems rather on edge. Maybe this is because he is talking with Police Inspector Porfiry Petrovich (Stephen MacNeice) and they are discussing the recent murder of local pawnbroker Alyona Ivanovna and her sister Lizaveta. Raskolnikov had been a customer and had come to the pawnbroker to claim back some items he had left with her. As the two men talk, there is a flashback to a few days previously and we find out that Raskolnikov needed the money as he had given it to Sonia Semyonovna Marmeladova (Christina Baston) to help with the funeral expenses for her father who was a friend of Raskolnikov, despite being a drunken fool who had squandered his family’s money, forcing his daughter to become a prostitute so that the family could eat. Despite her rather dodgy employment, Sonia is a very moral Christian girl with a rod of iron for a backbone. As time moves on, and Inspector Porfiry keeps talking with him, Raskolnikov’s behaviour becomes very erratic and he seems to be losing control of his mind as the story moves towards its inevitable conclusion.

I have to say that just from a writing point of view, this version of Crime and Punishment is a wow from me. To be able to take the original book and manage to extract everything needed for a ninety-minute play is just amazing. Despite its length, we very quickly get to know all we need to about the various characters, that are presented to us. I could easily sit here now and write a paragraph on my impressions on the personalities of the three main characters and then add some more on the various others – played by Christina and Stephen – that were presented during the show. Hats off to Marilyn and Curt for producing such a well-written flowing narrative with a distinct start, middle and end that leads the audience through and lets them consider the future for Raskolnikov, Sonia and Porfiry.

Turning to the production and all praise to the three actors. Christopher Tester’s Raskolnikov, was a fascinating character with some wonderfully provocative monologues delivered with passion. Christina Baston portrays Sonia beautifully. In fact here is a real ‘bazinga’ moment when she first appears. In a stunning white dress with a large cross hanging from her neck, she looks so pure and virtuous that it is a jaw dropping moment when we find out she is a prostitute and for a few seconds I did wonder if I had heard it wrong. I really loved Stephen MacNeice’s police inspector. From the start, there was this wonderful feeling of seeing a cat playing with a mouse in his interactions with Raskolnikov. Stephen keeps Porfiry on an even keel throughout, giving his prime suspect enough to make him talk – for as that other famous detective, Hercule Poirot said, “‘It is a profound belief of mine that if you can induce a person to talk to you for long enough, on any subject whatever, sooner or later they will give themselves away.”

Director Ross McGregor has put together a very smooth show that flows nicely and has a narrative that compels the audience to follow it through to the end. I particularly liked the flashback sequences and thought the murder itself was extremely effective. I only have two small criticisms with the production as an audience member. I think it would have been better to have another couple of actors to cover the minor characters so that the main actors – all of whom I adored – would stay with their characters throughout. My other minor point was the music. It was an interesting idea to use fairly contemporary music in the background but on a couple of occasions, the music was slightly distracting as my subconscious picked up a song I knew being played in a way that felt wrong. A very minor point but talking with my companion afterwards, he had a similar issue. Having said that, I thoroughly enjoyed Crime and Punishment. It is an extremely well-written production, very nicely staged and performed by a fine cast in wonderfully atmospheric way that, even though we all knew who the murderer was, held the audience spellbound throughout.

A tense psychological thriller on the nature of evil, the story is set in the mind of a murderer, where he relives and explores the thoughts, ideas and feelings that drove him to his horrific crime.

Direct, haunting and relevant, the play becomes a psychological landscape which creates a thrilling journey into the mind of a killer and his search for redemption. This is an intimate and spiritual journey which seeks to unveil hidden dimensions of the human condition.

Four-time Off West End Award Nominated Arrows and Traps present Crime and Punishment at the Jack, following their critically-acclaimed and sell-out productions of Anna Karenina and The Gospel According To Philip. 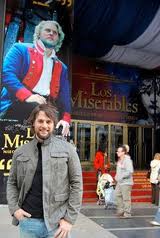 There have been some grumblings from a number of theatre-goers recently in relation to ‘safe’ casting, in which certain productions are repeatedly returning to the same actors. I understand their point. As brilliant as these established performers may be, the joy of theatre is that you are able to experience a new interpretation of a…