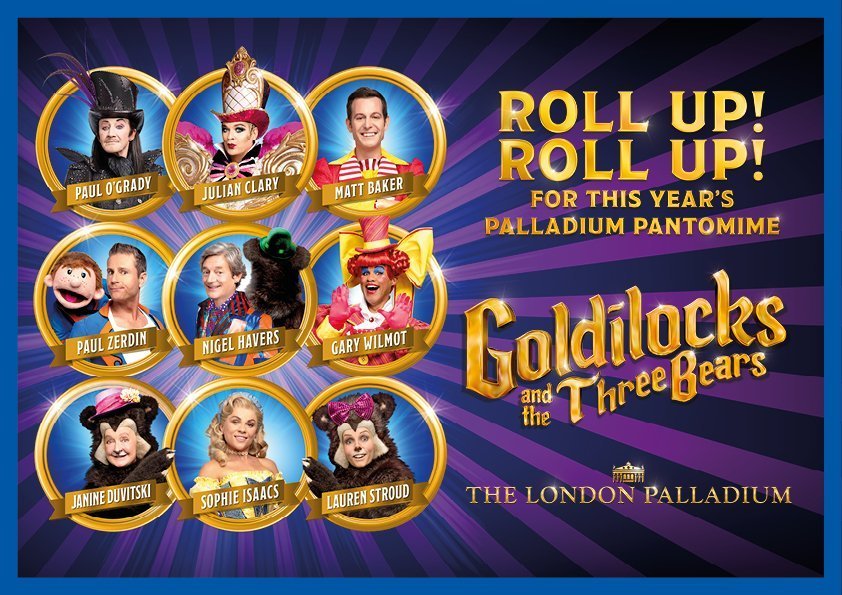 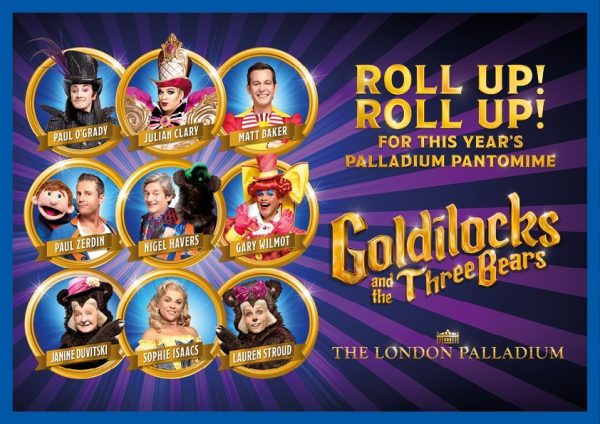 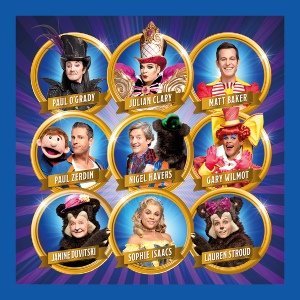 Dame Betty Barnum and her daughter Goldilocks’ circus is under threat from an evil rival circus owner and, with the help of their madcap circus friends, they’re battling to rescue their Big Top from ruin. Will they succeed? All seems lost, until three brilliant Bears join the gang… Roll up, roll up to see panto join the circus, and be swept away by a London Palladium spectacular that’s just right, at the home of pantomime!

Returning for the fourth year and once again produced by the Olivier award-winning team and directed by Michael Harrison, choreography will be by Karen Bruce, set design will be by Ian Westbrook, with a returning team of costume designers including Hugh Durrant, visual special effects by The Twins FX, lighting by Ben Cracknell, sound design by Gareth Owen and original music by Gary Hind.

Janine Duvitski was in the original production of Abigail’s Party, written and directed by Mike Leigh. Her more recent stage credits include On the Town for English National Opera at the London Coliseum and The Coast of Utopia for the National Theatre. She is best known on television as Jane in Waiting for God, Pippa in One Foot in the Grave and Jacqueline in Benidorm a role she recently revived on stage in Benidorm Live also produced by Michael Harrison. Her film credits include About a Boy and The Madness of King George.

Sophie Isaacs was most recently seen on stage playing Annette Hargrove in Cruel Intentions the Musical which had its UK premiere at the Edinburgh Fringe this summer. Her previous theatre credits include playing the title role opposite Craig Revel Horwood in the Qdos Entertainment production of Cinderella at the New Victoria Theatre in Woking, Heather McNamara in Heathers at The Other Palace as well as it’s transfer to the Theatre Royal Haymarket, Kinky Boots and Made in Dagenham both at the Adelphi Theatre, Grease at Leicester Curve Theatre and the European tour of The Rocky Horror Show.

Lauren Stroud was last seen on stage in the West End production of Strictly Ballroom at the Piccadilly Theatre. Her previous theatre credits include Scrooge at Leicester Curve Theatre, Top Hat at Kilworth House, Strictly Ballroom at the West Yorkshire Playhouse and on tour in Toronto, Hairspray, Dance ‘til Dawn, 9 to 5 The Musical and Grease all on tour in the UK and Wicked at the Apollo Victoria.

Best known as host of BBC Radio 2’s The Paul O’Grady Show and for helping rescue dogs in For the Love of Dogs – not to mention his acid-tongued creation Lily Savage – Paul O’Grady is returning to the London Palladium following his performance as The Wicked Stepmother in Cinderella, which reintroduced pantomime to the iconic venue in 2016.

Matt Baker, who will make his Palladium Panto debut is best known on television as a presenter of The One Show and Countryfile on BBC1. Previously he presented Blue Peter and was a finalist on Strictly Come Dancing. He has been seen on stage as Caractacus Potts in Chitty Chitty Bang Bang.

Goldilocks and the Three Bears is produced by Nick Thomas and Michael Harrison for Qdos Entertainment.

Nick Thomas is the founder and Chairman of Qdos Entertainment Group, one of the largest entertainment companies in Europe and is the UK’s second largest regional theatre and concert hall operator. Earlie this year Thomas was awarded an MBE for Services to the Entertainment Industry and to Charity.

Michael Harrison has previously produced over 100 pantomimes for Qdos Entertainment where he is also Managing Director. As a producer in the West End his credits include Joseph and the Amazing Technicolor Dreamcoat at the London Palladium, Gypsy, The Bodyguard, Annie and Mel Brooks’ Young Frankenstein.

As the world’s biggest pantomime producer, over the past 37 years Qdos Entertainment has established itself as one of the largest entertainment companies in Europe. Over the past three decades the pantomime giant has staged 719 pantomimes.