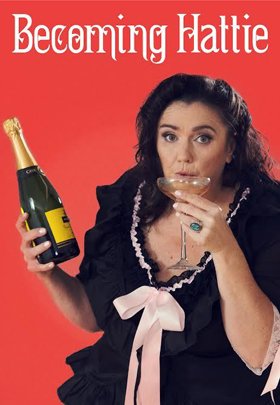 For those of us of a certain age, we remember Hattie Jacques as the sexually frustrated Matron in the Carry on Franchise and in Sykes the very successful British Sitcom that ran in the 1970s. What we may not know is the woman behind the “fat is funny” tagline, the struggles that this supremely talented actress faced when in her personal and professional life. This show gives us a glimpse in to what it is like to be Hattie, Highs and Lows.

Proteus Theatre Company’s is an award-winning Theatre Company whose aim is to create dynamic and relevant theatre. Becoming Hattie is their 2016’s touring production Directed by Mary Swan and performed by Ashley Christmas. The show is nearing the end of its 5 month national tour up and I was fortune enough to catch it at The Leicester Square Theatre’s Lounge Venue.

The show was inspired by a conversation in 2012 between the show’s performer Ashley Christmas, and Proteus Theatre’s Artistic director Mary Swan. If you cut forward three years Becoming Hattie is the result.

The premise for production is simple, explore Hattie Jacques, from a Feminist perspective – could she have had the career she had if she lived in 21st century Britain – however the result is so much more complicated and satisfying wonderful to watch.

The show is performed by the very talented Ashley Christmas: this woman is superb, her comic timing is sublime and her performance is delivered at a very high level. Ashley plays all the parts in the production, of which there are many.

The two main protagonists are Jo and Hattie. Jo idolises Hattie Jacques, and has spent her life trying to emulate her career. We watch both characters in their day to day lives, working their jobs and their job jobs, their home life and personal relationships, their auditions and their paid work.

As the show progresses we realise that regardless of talent being anything but a beautiful slim woman in this business we call show is not easy. The show questions if indeed it is worth trying to make it as an actor if the world stereotypes the parts you can play!

The real beauty of the show is watching the super talented Ashley, her physical appearance is what the public would call a plus size – ironically this does not provide any difficulties for her as she morphs from one character to another, changing physicality and accent for each of her characters.

Whether Ashley is playing cleaner number 4 or Jo, or Jo’s rather soulless agent. Be her Hattie Jacques with full RP accent and poise, a dancing Nazi spider, or Jo’s next door neighbour, Ashley’s delivery is spot on. She is a very talented performer and you believe every character Ashley delivers. As an audience you laugh with her and admire her comic timing.

Ashley has the rare talent to take an audience from roaring laughter to a silent room where you can hear a pin drop and witness a tear in the audiences’ eyes.
When Ashley requires assistance with a scene (the majority of the show is a monologue) she looks to her audience to step in to cameo roles. For some audiences this can be quite scary, however, Ashley handles her audience with care and love and receives some great cameos in response. I was fortunate enough to play “Kirsty Walk” the night I was there.

To be honest, Jo may be in love with Hattie Jacques, “the darling of the music hall, the first lady of witty repartee and effortless joy, the loquaciously effortless superlatively supreme… Miss Hattie Jacques”, But I rather Love Ashley Christmas.

All in all this show should come with a public health warning – GOOD FOR YOUR SOUL. If it takes a plus side performer, to play a plus sized performer to actually show that acting is not about size, but instead about talent and connecting with your audience, then this show is worth its weight in gold!

Becoming Hattie
Touring from 5th March 2016 to 2nd July 2016
It’s 1974 and 8 year old Jo is snuggled up on the settee in her flammable polyester nightie, watching the family’s first colour TV. Eating arctic roll and reading ‘Jackie’ magazine, she is idly glancing at the telly when Sykes comes on. Jo is suddenly riveted. Her spoon slips from her hand, her mouth drops open and her artic roll slips from the plate and on to the floor: hundreds and thousands, a cascade of sugary artificial colourants, rain all over the wool mix carpet. There’ll be hell to pay tomorrow when her mum hoovers the house.

That woman is Hattie Jacques.

Forty years later and Jo is indeed walking in the footsteps of her idol. Despite the uncertainty, the periods of unemployment, the agent who seems to care more about raking in a quick buck than advancing her career, Jo is an actress. But is there a place for her in tv, film or theatre? Why does she only get cast as the nurse, never the surgeon? Why is she always the council estate mum in Casualty with the dodgy kid, the high pony tail and the pack of pitbulls? Why is she too fat to play Lady Macbeth? Why does she have a cupboard full of tabards? Can Hattie help Jo find the answers to this modern mystery? Could it be that nothing has changed for women like Jo since Hattie did Carry On?

Thoughtful, funny, warm and nostalgic, this is an affectionate look at the life and career of a remarkable woman and a witty, caustic look at modern life in show business and its cultural attitudes toward larger women. A world where Simon Russell Beale can play an XXL Hamlet, but lead roles are non-existent for larger actresses.
Suitable for ages 15+
http://www.proteustheatre.com/