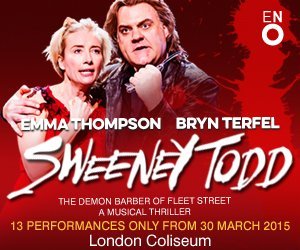 As it continues its sensational record-breaking 6th year in the West End, the producers of Thriller Live are delighted to announce that the show is further extending its booking period to 6 September 2015. It had been booking to 26 April. Producers Paul Walden & Derek Nicol said in a statement: “We are thrilled that … Read more

The West End production of the two-time Tony award-winning Beautiful The Carole King Musical, will open at the Aldwych Theatre in February next year. Based on the early life and career of legendary singer/songwriter Carole King, Beautiful has a book by Douglas McGrath with words and music by Gerry Goffin, Carole King, Barry Mann and … Read more 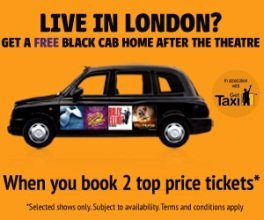 As part of their September ticket offers, Encore Tickets and their affiliates have teamed up with GetTaxi, London’s only Black cab app, to offer you a FREE pre-booked black cab ride home after the performance. If your destination is a London postcode and you book two top price tickets to any of the shows featured … Read more

GALA PERFORMANCE Monday 22 September 2014 of Miss Saigon featuring the magnificent cast of the new production and members of the original company. Cameron Mackintosh has announced that on Monday 22nd September 2014 at 7.00pm there will be a Gala Performance of Boublil & Schönberg’s MISS SAIGON to celebrate 25 years since the musical originally … Read more