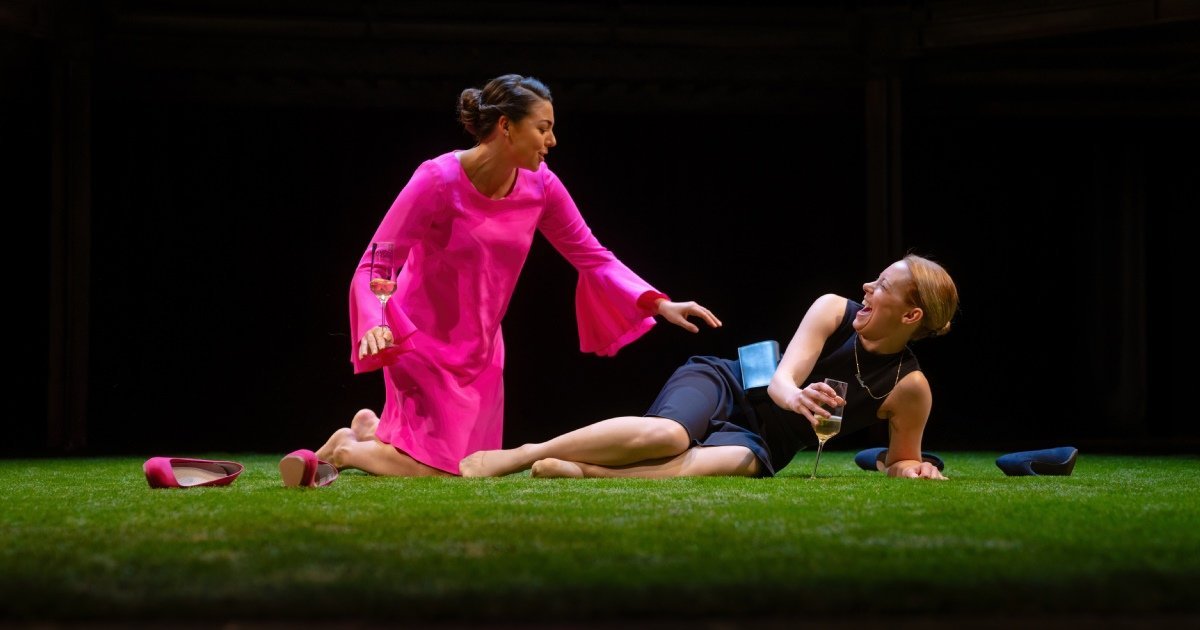 It’s hard to disagree with George Bernard Shaw’s assessment that As You Like It is one of Shakespeare’s weaker works. The play feels cobbled together, especially in the second half, with scenes that barely hang together and characters whose role and purpose is unclear. Above all, it seems to have been written solely as a crowd pleaser. Yet the play provides, in Rosalind, one of the great female roles in the canon and many ideas of the ideas that are no more than sketched in As You Like It surface to far better effect in later, greater works like Twelfth Night, King Lear and – most clearly – The Tempest.

A challenge then for the RSC and for director Kimberley Sykes to deliver a production that entertains but also does something more, resonating perhaps with our troubled times.

To achieve the first objective, Sykes gives that fine actor Sandy Grierson full rein as Touchstone and he responds by throwing everything bar the kitchen sink at the role in an effort, largely successful, to make the least funny and least lovable of Shakespeare’s clowns genuinely enjoyable.

And as regards the latter objective, Sykes switches the gender of several characters. This sometimes works well – Emily Johnstone is outstandingly funny as Amiens and Sophie Stanton moving as Jacques but it simply doesn’t work at all with the decision to make the lovelorn shepherd Silvio a lovelorn shepherdess. As Silvia, Amelia Donkor is gentle and plausible in her pursuit of another shepherdess, Laura Elsworthy’s Phoebe. However, the switch is undermined by Shakespeare’s text.

But any production of As You Like It rises or falls on its stars. Following the likes of Juliet Stevenson and David Suchet, David Ajao gives us a bouncy and indefatigable Orlando while Lucy Phelps is superb as an acrobatic Rosalind. The two actors simply ooze charm and energy as Shakespeare’s ludicrously convoluted plot winds and unwinds around them. The other outstanding performer is Sophie Khan Levy, as Rosalind’s cousin Celia.

Sykes’ new interpretation emphasises the theatricality of the story, incorporating the PA system and audience participation as well as wheeling the wardrobe onto the stage. The Forest of Arden and goats (goats!) are brought to life in the audience and there is a stunning reveal in the final scene before the play concludes with a merry dance and Rosalind’s tender epilogue.

As You Like It delivers a satisfying evening’s entertainment but the sated feeling is unlikely to last long once you’ve left the theatre.

All the world really is a stage in this joyous and imaginative version of Shakespeare’s madcap romantic comedy directed by Kimberley Sykes.

Rosalind is banished, and with her best friend Celia by her side, she journeys into exile. But not before catching the eye of love-struck Orlando, who is also forced from The Court into the dappled Forest of Arden. What ensues is a riotous adventure where barriers are broken down and all can discover their deeper selves.

Blending physical comedy, music, storytelling and puppetry, this playful As You Like It brings the audience right to the heart of the action and is a celebration of theatre itself.