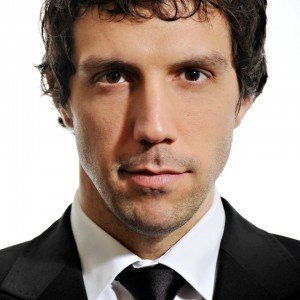 Alex Gaumond will replace Rufus Hound as Freddy Benson in Dirty Rotten Scoundrels at the Savoy Theatre from 11th November 2014, with understudy Gavin Alex in the role until Gaumond takes over.

A popular West End actor, Gaumond recently starred as Miss Trunchbull in the RSC’s Matilda at the Cambridge Theatre. His previous roles include Alberto Beddini in Top Hat, Galileo in We Will Rock You, and of course originating the West End role of Emmett in Legally Blonde.

Dirty Rotten Scoundrels has been at the Savoy Theatre since 10th March 2014 and is currently booking to March 2015.

Dirty Rotten Scoundrels
Big-time con-man Lawrence Jameson’s livelihood is threatened by the arrival of small-time con-man Freddie Benson in the swanky French coastal town of Beaumont sur Mer. After a spot of ‘getting to know you’, the duo join forces and set about their shared practice of fleecing wealthy society ladies by spinning them hard-luck tales.

Lawrence is by far the more experienced, and Freddy forces him to share his knowledge so that he can get a bigger bite of the cherry. When the time eventually comes to bid adieu, Freddy decides to stay a bit longer in Beaumont sur Mer, but it quickly becomes apparent that this town ain’t big enough for the both of them.